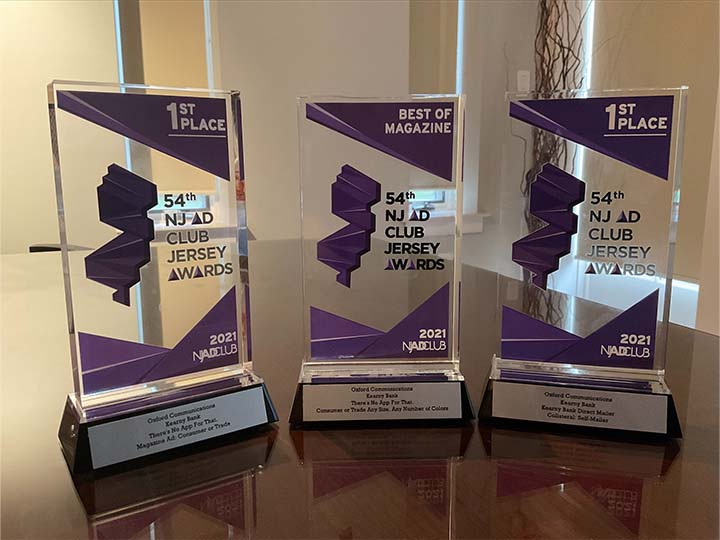 It was the ideal way to celebrate.

“We’re delighted by this recognition from the New Jersey Ad Club, and the timing makes it that much more meaningful,” says Kearny Bank 2nd Vice President/Marketing Manager Janet DeSiano. “It takes commitment and teamwork to establish a close, effective partnership with an advertising agency. I believe these three Jersey Awards demonstrate that after working together for one year, Kearny Bank and Oxford Communications are truly a successful team. That said, I’m also confident that even more captivating visions of our brand are just over the horizon.”

Kearny Bank and Oxford Communications formally began their advertising relationship in May 2021.

Combining the finest traditions of community banking with the industry’s latest, most effective financial products and services, Kearny Bank provides business and personal clients with the tools for success. Established back in 1884, and now operating from corporate offices in Fairfield, NJ, Kearny Bank’s footprint covers most of New Jersey, along with Brooklyn and Staten Island. Additional information is available at kearnybank.com or by visiting Kearny Bank’s social media channels: Facebook [facebook.com], Instagram [instagram.com], Twitter [twitter.com], LinkedIn [linkedin.com] and YouTube [youtube.com].